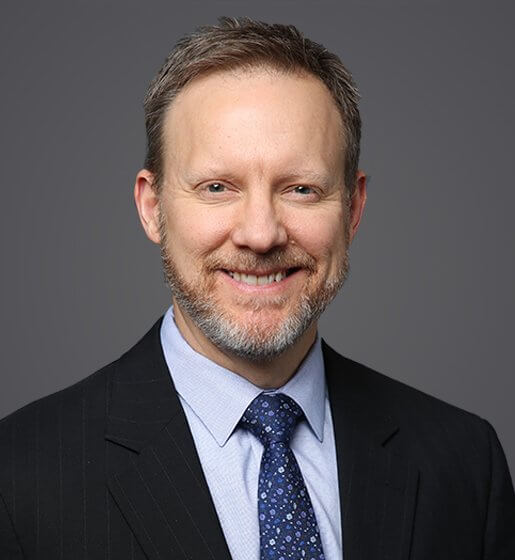 Eric has more than twenty-five years’ experience investigating, negotiating, and litigating disability access claims under federal, state, and local laws—including Title III of the Americans with Disabilities Act, the federal Fair Housing Amendments Act, and the Chicago Building Code—and, most recently, claims involving a hotel in California, a restaurant in Chicago, and multifamily housing developments in Oklahoma.

At Northwestern University School of Law, Eric was class commencement speaker and a semifinalist in the Miner Moot Court Competition. As an undergraduate at Yale, Eric founded a national-champion improvisational comedy group.

As a litigator, Eric has represented owners, contractors, subcontractors, architects, engineers, and lenders in trials, arbitrations, and mediations. Specific lawsuits include the following:

Eric also has extensive experience in other areas of commercial litigation.

In addition, Eric is well versed in all facets of the Americans with Disabilities Act (ADA) and the Fair Housing Act (FHA). For numerous clients, Eric has provided counsel on interpretation of and compliance with the ADA, the FHA, and other federal, state, and local accessibility and civil rights statutes.

Insights by Eric A. Berg

On June 10, 2022, Illinois Governor JB Pritzker signed House Bill 5412 and its trailer bill, House Bill 4600, into law. Both bills amend the Illinois Wage Payment and Collection Act (WPCA) to make certain primary contractors liable for any debt owed by a subcontractor—at any tier— relating to the wage claimant’s performance of labor for contracts entered into on or after July 1, 2022.

On April 27, 2020, the Illinois Workers; Compensation Commission rescinded its emergency rule that had expanded the presumption of work relatedness for COVID-19 infections to all businesses that are deemed to be critical under Governor Pritzker’s stay-at-home order.

On April 13, 2020, the Illinois Workers’ Compensation Commission established an emergency rule amending the Illinois Administrative Code for workers’ compensation hearings that creates a rebuttable evidentiary presumption for workers infected with COVID-19 who work in “critical” industries as defined in Governor J. B. Pritzker’s March 20, 2020, stay-at-home order, as well as those who are first responders.

Overruling 35 years of precedent, the Illinois Supreme Court has held that buyers of newly constructed homes cannot sue subcontractors for breach of the implied warranty of habitability.

In an opinion released on October 9, 2018, the Supreme Court of Ohio held that a general contractor’s commercial general liability insurance did not cover the defective work of either that contractor or its subcontractors.