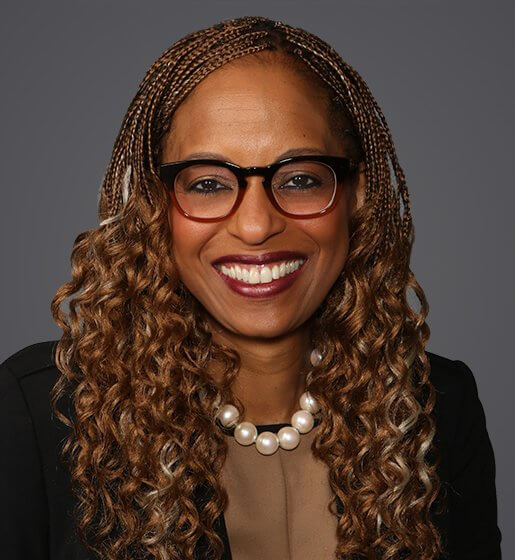 Michelle P. Wimes serves as the Chief Diversity and Professional Development Officer at Ogletree, Deakins, Nash, Smoak & Stewart, P.C., one of the nation’s largest labor and employment law firms.  In her role, Michelle leads the firm’s efforts to attract, develop, retain, promote and advance a diverse group of attorneys across the firm’s national platform of 53 offices in the U.S., Europe, Latin America, and the Caribbean.  Additionally, Michelle leads the firm’s attorney training and professional development efforts.  She is based in Ogletree Deakins’ Kansas City office.

Michelle has extensive experience in delivering strategic leadership, client development, and talent management programming.  She is deft at implementing change management strategies necessary for comprehensive and effective diversity and inclusion and professional development initiatives and programming.  Previously, Michelle practiced law for 14 years where she handled all aspects of employment litigation while serving as an equity partner at a Kansas City-based firm.  She focused on matters involving employment discrimination, harassment, and civil rights issues while representing clients before the Department of Education’s Office of Civil Rights, the Department of Elementary and Secondary Education, the Missouri Commission on Human Rights, the Equal Employment Opportunity Commission, as well as local, state and federal courts.

Later, Michelle spent four years on the senior management team of a premier Am Law 100 law firm as their Director of Strategic Initiatives, spearheading diversity and inclusion strategies and programming for lawyers across nine offices in the United States and Europe.

Michelle is a nationally renowned presenter on professional development, diversity and inclusion issues in the workplace on topics such as, “Engaging Decision-makers and Practice Group Leaders in Diversity and Inclusion Efforts;” “Aligning Associate Competencies and Diversity Principles;” and “Reconciling Diversity, Inclusion & Meritocracy: Challenges & Opportunities.”  She has presented before organizations such as the Minority Corporate Counsel Association, the Center for Legal Inclusiveness, the National Association of Legal Professionals, the National Bar Association, the Defense Research Institute, and the Association of Law Firm Diversity Professionals.

Michelle has been recognized nationally and locally for her many professional contributions. Ingram’s magazine selected Michelle as a member of the “40 Under 40 Class of 2005” and in 2007, Michelle received The Daily Record’s Legal Leader of the Year Award. In 2009, Kansas City’s Call newspaper recognized Michelle as one of the top 25 most influential African-American Kansas Citians. In 2012, Michelle was awarded the Distinguished Arts and Science Alumni Award from the University of Missouri-Kansas City (UMKC) and was featured in the inaugural edition of Who’s Who in Black Kansas City. In 2014, the Societas Docta presented Michelle with the “Nefertiti” award for her demonstrated leadership in the Kansas City community.  In 2015, Michelle was named a “Champion of Change” by the Bruce R. Watkins Cultural Heritage Center in Kansas City and recognized by Ingram’s Magazine as “50 Missourians You Should Know.” In 2016, the National Congress of Black Women recognized Michelle with the Shirley Chisholm Award for her public service, and in 2018, Missouri Lawyer Media recognized Michelle with their inaugural diversity and inclusion award for advancing inclusion in Missouri’s legal community. Michelle has also been a featured author in SAVOY magazine, MultiCultural Law magazine, The Kansas City Business Journal, Women’s Inc. Media, and the American Bar Association Journal.

Michelle has spent over 25 years volunteering in the community.  She currently serves as a member of the UMKC’s Board of Trustees where she serves as a member of the Governance Committee; a member of the foundation Board of K.C. Girls Preparatory Academy, a new charter school in Kansas City; and a co-chair of the Social Action Committee of Delta Sigma Theta Sorority Alumni Chapter. Formerly, Michelle served as Board President of St. Teresa’s Academy and chair of their Parent Diversity Committee as well as chair of the Diversity Committee of St. Peter’s Catholic School for six years. Michelle served as Founding President of the Gifted Hands’ Domestic Violence Prevention Center for Kansas City’s teen girls for seven years.  In addition, she has served on the University of Central Missouri’s Board of Governors, UMKC’s Alumni Association Board of Directors where she chaired the Minority Affairs Committee, and the UMKC Arts and Sciences Alumni Board.  She was Founding Vice President of KIPP Endeavor Academy, a nationally recognized charter school in Kansas City.

Prior to a career in law, Michelle was an elementary and middle school teacher in Kansas City.  She received a B.A. from the University of Missouri and performed graduate work at the University of Seville in Spain and undergraduate work at the University of Xalapa in Veracruz, Mexico.  Due to her studies and her extensive legal work in Latin America, she is fluent in Spanish.  Michelle earned her law degree, with trial advocacy honors, from Tulane Law School.  She is the proud wife of federal district court judge Brian C. Wimes and the mother of three daughters, Sydney, Gabrielle, and Saige.

Trends in Paid Parental Leave Come to the Legal Industry: A Call to Action for Law Firms?

As Chief Diversity and Professional Development Officer at Ogletree Deakins, I have seen that law firms specifically, and the legal industry, generally, face external pressures from clients, outside counsel, and diversity groups to maintain diversity initiatives. Recently, some of that pressure has been coming from sources internal to law firms—namely, their own attorneys. As more companies offer their employees attractive leave benefits, law firms are following suit by offering their attorneys robust parental leave benefits. Here are some cutting-edge questions for companies promoting a work-life balance to consider in terms of their parental leave allowances, and trends in the promotion and advancement of women in law, including the Mansfield Rule and how it can positively impact the legal profession.

On Monday, November 7, 2016, I traveled to Greenville, South Carolina—the birthplace of our firm—to participate in the Greenville Chamber of Commerce’s 2016 ATHENA Organizational Leadership Award ceremony. This award recognizes organizations for their commitment to increasing the positive impact of women’s leadership in the Greenville community.

On August 2, 2016, the Board of Governors of the Federal Reserve System, Federal Deposit Insurance Corporation, the Office of the Comptroller of the Currency made available a five-page Frequently Asked Questions (FAQs) document to accompany an interagency policy statement issued by these agencies and others in the summer of 2015.

Combining Professional Development and Diversity Departments: How One Change Can Make a Big Difference

In the fall of 2011, the leaders of Ogletree Deakins took a bold and strategic decision to combine the firm’s professional development and inclusion departments into a single department. In doing so, the firm actualized its commitment to effectively developing all levels and varieties of talent, regardless of how attorneys identify in terms of race, gender, sexual orientation, gender identity and expression, or disability.

Creating an Inclusive Law Firm Culture: A Strategy and a Story, Too

In recent years, much has been written about the importance of creating diverse, inclusive workplaces to ensure the best possible business results. As with any other successful initiatives spearheaded by an organization, law firm inclusion requires a well thought-out strategic plan implemented by everyone who works in the firm. A strategic plan is key to achieving the structural and cultural changes that need to take place to make inclusion a reality.