Note: After this article was published, OSHA decided not to seek review of the judge’s holding described here.  See our note below.

The holding is expected to reverberate widely, as OSHA and its lawyers have many times used the chart as evidence that employers had violated the General Duty Clause of the Occupational Safety and Health (OSH) Act.

Many years ago, the National Weather Service (NWS) of the U.S. National Oceanic and Atmospheric Administration published this heat index chart. 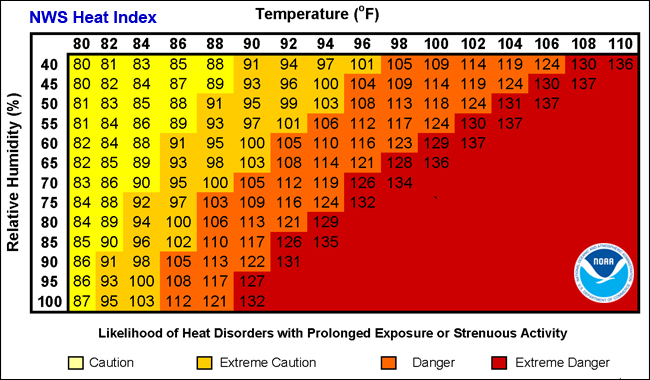 The chart has what might be considered to be two layers of information, the second of which is important to OSHA prosecutions. The chart’s first layer consist of its numbers, which indicate how hot human beings feel when exposed to certain combinations of temperature and humidity. For example, when the temperature is 84 degrees Fahrenheit and the relative humidity is 70 percent, one feels as if the temperature were 90 degrees. The numbers in that first layer reflect a scientific paper published in 1979; neither its validity nor that of the first layer of the chart has been questioned.

The chart’s second layer—which consists of its color codings, its legend for the color codings, and the legend’s warnings (“Caution,” “Extreme Caution,” “Danger” and “Extreme Danger”)—is a different story, as will be explained below.

OSHA’s Reliance on the Chart

OSHA and its lawyers have for years cited the NWS heat index chart as evidence that employers exposed their employees to excessive levels of heat, in violation of the OSH Act’s catch-all provision, the General Duty Clause.

In 2016 and 2017, OSHA issued five such citations to the United States Postal Service (USPS), alleging violations in San Antonia and Houston, Texas; Des Moines, Iowa; Charleston, West Virginia; and Benton, Arkansas. OSHA introduced the NWS heat index chart into the trial record and pointed to it as evidence.

USPS argued, however, that the chart’s second layer should be disregarded as lacking a scientific basis. (Ogletree Deakins represented USPS in this matter.) It argued that the NWS had based the chart’s second layer on a 1981 article in a popular magazine on weather and climate. The article cited, however, no sources for its assertions that certain heat index values indicated caution, extreme caution, danger, and extreme danger. USPS also showed that the co-authors of the article were a meteorologist and a climatologist with no apparent qualifications in human physiology. It also introduced expert testimony rebutting the idea that the chart had any scientific validity.

On July 15, 2020, Judge Sharon Calhoun of the Occupational Safety and Health Review Commission agreed that “no evidence was presented to establish the scientific basis for the risk categories depicted on the NWS heat index chart.” Despite the prominence of the issue at the hearing, Judge Calhoun found that OSHA had failed to provide any “supporting data … for why the levels of risk [indicated by the chart’s color coding and legend] are attributed to their respective temperatures.”

OSHA has not yet asked the full Commission to review the judge’s decisions in the five cases.  Unless review is sought and granted, and the judge’s decisions are adopted as the Commission’s own, they will not be binding on any other judge or the Commission. If OSHA does seek review and it is granted, the judge’s findings about the chart are highly unlikely to be challenged, let alone overturned. And even if the judge’s decisions remain non-binding, they are still likely to be influential, as Judge Calhoun (a former supervisory lawyer for OSHA) is known and widely respected as a judge highly experienced in occupational safety and health law. The decisions thus likely spell the end of OSHA’s ability to rely on the NWS heat index chart.

Note: The prediction above that OSHA would be unlikely to challenge Judge Calhoun’s finding of no scientific basis for the National Weather Service’s Heat Index Chart has come to pass. In a petition for discretionary review of the judge’s decision, OSHA made clear that it was not seeking review of that finding.

In what is likely the final predicate for issuing a COVID-19 emergency temporary standard (ETS), on March 12, 2021, the U.S. Occupational Safety and Health Administration (OSHA) issued a new National Emphasis Program (NEP) “targeting specific high-hazard industries or activities” in which there is a “hazard of contracting SARS-CoV-2 (severe acute respiratory syndrome coronavirus 2), the cause of COVID-19.” The NEP also “includes an added focus to ensure that workers are protected from retaliation.” The NEP is effective immediately and will remain in force no longer than a year from March 12, 2021.

In September 2014, California Governor Jerry Brown signed into law a number of bills that will impact the employer community. A brief summary of these new laws, along with links to the bills, can be found below. Healthy Workplaces, Healthy Families Act of 2014—Paid Sick Leave (AB 1522) On September 10, 2014, Governor Brown signed