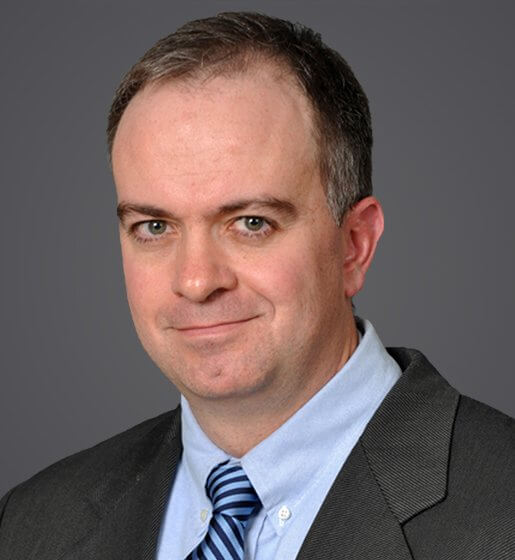 Patrick Curran advocates for and advises employers in nearly every area of labor and employment law. He has particular expertise in the litigation and arbitration of labor and employment disputes, and has represented employers before state and federal courts and administrative agencies in a broad range of matters including the alleged violation of non-solicitation, non-competition, and confidentiality agreements, theft of trade secrets, breach of contract, breach of fiduciary duty, wrongful termination, and violation of federal and state wage and hour, anti-discrimination, and anti-retaliation laws (including class and collective action lawsuits alleging violation of those laws). Mr. Curran also has extensive experience representing clients in alternative dispute resolution proceedings, including arbitration, mediation, and agency conciliation, and counsels employers on a wide variety of employee relations issues, including non-competition, non-solicitation, and confidentiality agreements, employee handbooks and policies, employment agreements, terminations, and compliance with federal and state employment laws.

Non-compete, confidentiality, and trade secrets litigation
Mr. Curran has represented clients in numerous lawsuits involving the alleged theft of trade secrets, violation of confidentiality and fiduciary obligations, and breach of non-competition or non-solicitation agreements. In 2012, for example, Mr. Curran represented a medical research supply company in its lawsuit against a former employee and his new employer alleging theft of trade secrets and breach of a non-solicitation and confidentiality agreement. In late 2012, the federal district court granted our client’s motion for a preliminary injunction, and the lawsuit settled favorably shortly thereafter. Likewise, in 2011, Mr. Curran represented a professional search firm and its employee against a lawsuit filed by the search firm’s competitor (and the employee’s former employer), alleging breach of a non-competition agreement and unfair and deceptive business practices. The state trial court denied the competitor’s motion for a preliminary injunction, and the competitor dismissed the lawsuit voluntarily shortly thereafter. In 2011 and 2012, furthermore, Mr. Curran assisted a medical device manufacturer as counsel in separate lawsuits alleging theft of trade secrets and breach of restrictive covenants; both cases settled shortly after the respective courts granted our client’s preliminary injuntion motions. In addition to litigating restrictive convenant claims, Mr. Curran has also counseled clients extensively concerning the drafting, implementation, and enforceability of non-competition, non-solicitation, and confidentiality agreements.

Wage and Hour
Mr. Curran has represented clients operating in a variety of industries – including nationwide retail chains, a large business communications solutions company, cable and cable installation companies, and a nationwide operator of assisted living and nursing home facilities – in single-plaintiff, class, and collective action litigation arising under federal and state wage and hour laws. In 2011, for example, he defended a firm client against a putative class action filed in state court alleging failure to pay overtime and other violations of state wage and hour laws; following removal to federal court under the Class Action Fairness Act, and defeat of the named plaintiffs’ motion for remand to state court, the plaintiffs dismissed the lawsuit voluntarily. More recently, in 2012 and 2013, Mr. Curran represented a nationwide healthcare services company and several of its executives against claims that the company had failed to pay commissions in violation of state wage and hour laws; following discovery, the plaintiffs agreed to settle their claims for 0% of their demand, and dismissed them with prejudice. Finally, Mr. Curran has also assisted clients in navigating and responding to investigations and audits of their wage payment practices conducted by various state and federal agencies responsible for enforcing wage and hour laws.

EEO
Mr. Curran has assisted clients in countless lawsuits and agency proceedings brought by current and former employees alleging violation of state and federal laws against discrimination and retaliation. In one such case – a putative class action alleging age discrimination against an international power equipment manufacturing company – the named plaintiff agreed to a favorable settlement rather than risk a court ruling on our client’s motion to dismiss his claims based on a release alleged to be invalid. In another, a plaintiff alleging disability discrimination and retaliation agreed to settle her claims against our client, a large entertainment and telecommunications company, for a fraction of her demand after Mr. Curran established, through discovery of the plaintiff and of non-parties, numerous falsehoods in the plaintiff’s deposition testimony. In two other cases, Mr. Curran secured court orders precluding the plaintiffs from recovering on their claims, based on judicial estoppel and lack of standing, after discovering that they had failed to disclose their claims against our clients in their bankruptcy filings.

Wrongful Discharge
Mr. Curran has successfully represented a number of clients against claims brought by their former employees alleging that they were terminated wrongfully, in breach of public policy or of the implied covenant of good faith and fair dealing. In 2010 and 2011, for example, courts dismissed claims against our clients in two such cases – one on a motion to dismiss for failure to state a claim, and the other on a motion for summary judgment. The 2011 case included claims for violation of the Massachusetts Civil Rights Act, based on allegations that our client had violated the plaintiff’s rights to privacy and freedom of speech; those claims were dismissed on our client’s motion for summary judgment as well.

Labor Relations
Mr. Curran has broad experience in traditional labor work, having represented clients in connection with grievance arbitrations, collective bargaining negotiations, unfair labor practice charges, and representation elections. Most recently, in April 2013, Mr. Curran successfully defended a multinational snack food conglomerate in arbitration proceedings based on a union grievance protesting its discharge of a former employee; Mr. Curran obtained an award confirming that the grievant’s discharge had been for just cause.

On December 17, 2021, the Massachusetts Supreme Judicial Court (SJC) ruled that an employee discharged for submitting a written rebuttal to his employer in response to the placement of negative information in his personnel file can state a claim against the employer for wrongful termination in violation of public policy.

On June 10, 2021, the First Circuit Court of Appeals upheld the dismissal of a plaintiff’s lawsuit alleging, among other things, failure to pay wages under the Massachusetts Wage Act. In Rose v. RTN Federal Credit Union, the First Circuit held that the Labor Management Relations Act (LMRA) preempted the plaintiff’s wage claims because she was a member of a union and because her employer, RTN Federal Credit Union, had an existing collective bargaining agreement (CBA) with the union that governed her wages and overtime pay.

On April 9, 2021, the Massachusetts Supreme Judicial Court (SJC) ruled that an employee may be liable to his or her employer under the Commonwealth’s unfair and deceptive trade practices statute—which authorizes an award of double or treble damages for willful violations, as well as costs and attorneys’ fees—for actions that the employee engaged in during the course of his or her employment.

Recently, and for the first time in more than 20 years, the United States Court of Appeals for the First Circuit ruled on the transportation worker exemption contained in Section 1 of the Federal Arbitration Act (FAA). In Waithaka v. Amazon.com, Inc., 966 F.3d 10 (1st Cir. 2020), the court of appeals upheld a district court’s decision not to compel Amazon “AmFlex” delivery drivers (who are independent contractors) to arbitrate their wage claims. The decision is significant for companies that require their delivery drivers to sign arbitration agreements.