A New Primer on Voting Leave Requirements: Are You Ready for the Elections?

The U.S. general election is scheduled for Tuesday, November 8, 2016. In this election, voters will determine the next president of the United States, and all 435 seats in the U.S. House of Representatives and 34 of the 100 seats in the U.S. Senate are up for grabs. In addition, 12 states will hold elections for governor, 44 states will hold elections for state legislators, and many other state and local municipality races will determine ballot measures and elect officers such as attorneys general and mayors. Voter participation is as yet uncertain, but given the volatility of the election season to date, voter participation in these elections may be higher than expected. If so, employers may receive more requests for voting leave than they have in prior years. The following overview of state voting leave laws will arm employers with a basic knowledge of voting leave rights and prepare them for a potential onslaught of leave requests. 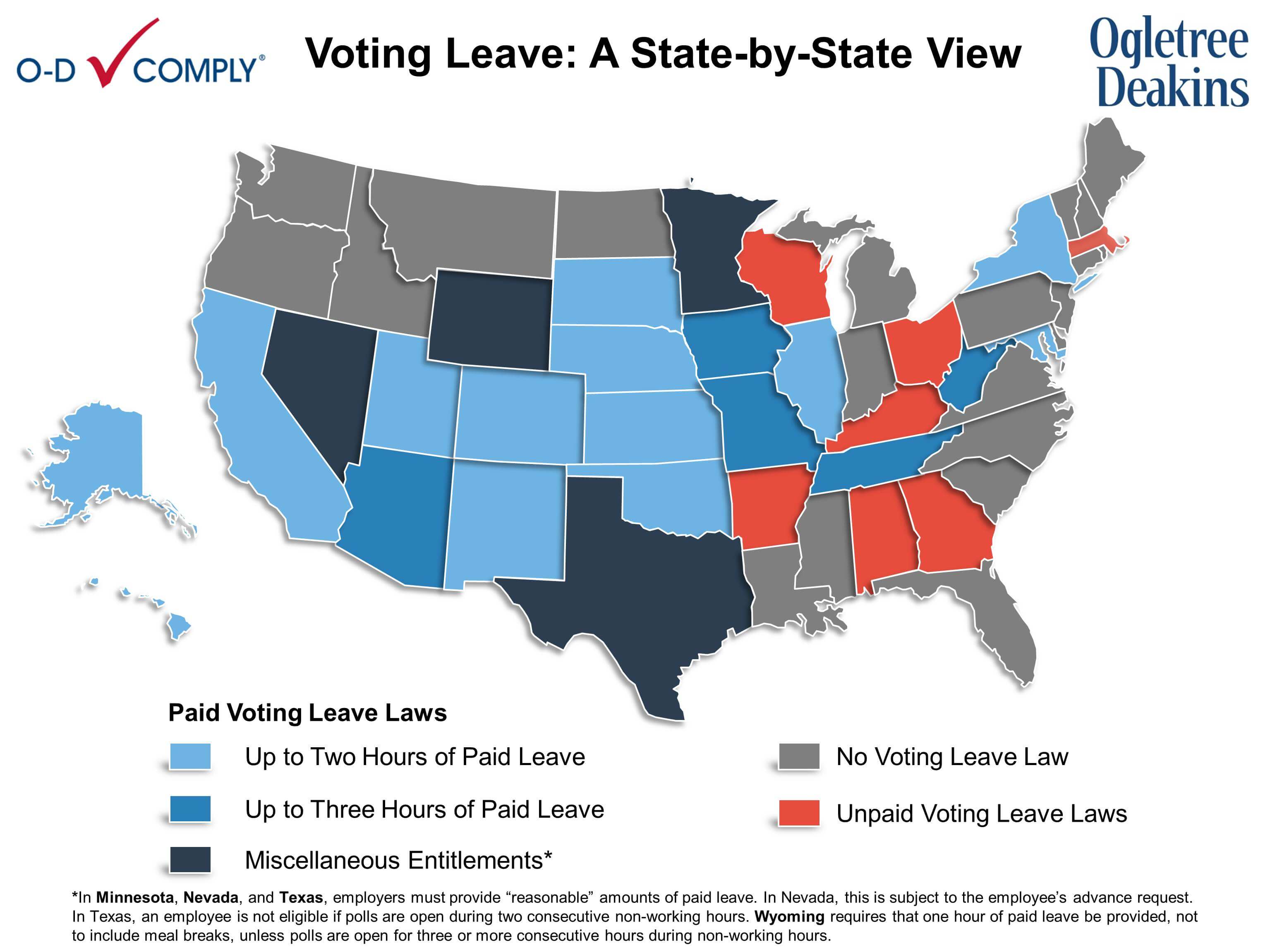 States With No Voting Leave Law

Other states do not have specific voting leave laws, but have laws related to voting about which employers may want to be aware. For instance, although Idaho and Michigan do not have a specific voting leave law, employers are prohibited from attempting to influence an employee’s vote by threatening discharge. Additionally, Louisiana, Florida, and Mississippi protect political activity, which precludes retaliation for voting, generally speaking. Finally, North Dakota “encourages” employers to provide employees with time off to vote, but does not require them to do so.

A number of states require employers to provide some amount of unpaid voting leave to their employees. Arkansas and Ohio generally require employers to provide a reasonable period of unpaid leave. In Alabama, an employee is entitled to one hour of voting leave if the polls aren’t open at least two hours before or one hour after their regular shift. To take leave, employees must simply give reasonable notice. In Georgia, employees must give notice and employers must provide “necessary” time off to vote up to two hours. However, Georgia employers are not required to provide this time off if an employee has two hours before or after work in which the polls are open. In Massachusetts, the voting leave requirement only applies in manufacturing, mechanical, and mercantile operations, and voting leave is only available in the first two hours that polls are open.

A number of states are also required to provide employees paid leave for the purpose of voting. In Minnesota, an employee must be given “the time necessary” to get to his or her polling place, cast his or her ballot, and return to work. In Nevada, voting leave is subject to the employee’s advance request, and the amount of time that is considered “sufficient” is determined by the distance of the polling place from the employee’s worksite. In Texas, an employee is not eligible for such leave if polls are open during two consecutive nonworking hours. Wyoming requires that one hour of paid leave be provided, not to include meal breaks, although the leave is not available if polls are open for three or more consecutive hours during an employee’s nonworking hours.

Many states require up to two paid hours of leave for voting purposes including Alaska, California, Colorado, Hawaii, Illinois, Kansas, Maryland, Nebraska, New Mexico, New York, Oklahoma, South Dakota, and Utah. Alaska requires employees to be provided two consecutive paid hours to vote unless they otherwise have two consecutive non-working hours to vote. In addition to providing voting leave, California requires employers to post a notice of employees’ voting rights 10 days prior to an election. The California law requires employees to provide employers with two days’ notice before taking leave. Colorado’s statute requires two hours of paid leave if an employee provides advance notice and does not have three or more non-working hours to vote when polls are open. Illinois and Nebraska also require that employees request leave in advance of elections. New Mexico’s two-hour paid leave is unavailable if an employee’s workday begins two hours after polls open or ends three hours before polls close. Similarly, New York’s paid voting leave is not available to employees who have four consecutive nonworking hours while polls are open in which to vote. New York, like California, also requires that employers post a notice of employees’ voting leave rights prior to election day, and also requires that employees request leave at least 2 days, but not more than 10 days, in advance. Oklahoma and Utah’s voting leave entitlements are subject to advance request by employees and are unavailable if polls are open three or more hours before or after an employee’s working hours.

The plaintiff alleged that he was terminated in violation of the Americans with Disabilities Act (ADA) because his employer regarded him as suffering from a “general mental disability.” Although the plaintiff had been diagnosed with obsessive compulsive disorder and depression, he explicitly stated that he was not relying upon those conditions as the perceived disability.

Effective November 18, 2014, the City of Rochester, New York will join various states and municipalities around the country—including Buffalo, New York—that prohibit employers from inquiring about a job applicant’s prior criminal conviction on initial employment applications. Under city ordinance No. 2014-155, it is impermissible for Rochester employers to make inquiries about criminal convictions during the “application process,” which is deemed to have ended once the employer conducts an “initial employment interview” or makes a conditional offer of employer.