No COVID-19 Slowdown for California PAGA Filings: The Data Is In

The COVID-19 pandemic did not slow down the pace of new California Private Attorneys General Act (PAGA) letters being filed with the state Labor Workforce Development Agency (LWDA), according to filing data. Instead, there was a significant increase in the filing of PAGA letters during the height of the COVID-19 pandemic in 2020 and 2021.

California’s PAGA, which was enacted in 2004, enables employees to bring representative claims to enforce violations of the California Labor Code on behalf of other allegedly aggrieved employees with the same employer.

The data shows that PAGA filings increased in 2020-2021 compared to the prior two years—a trend that appears to have an even steeper upward curve since the start of the pandemic. 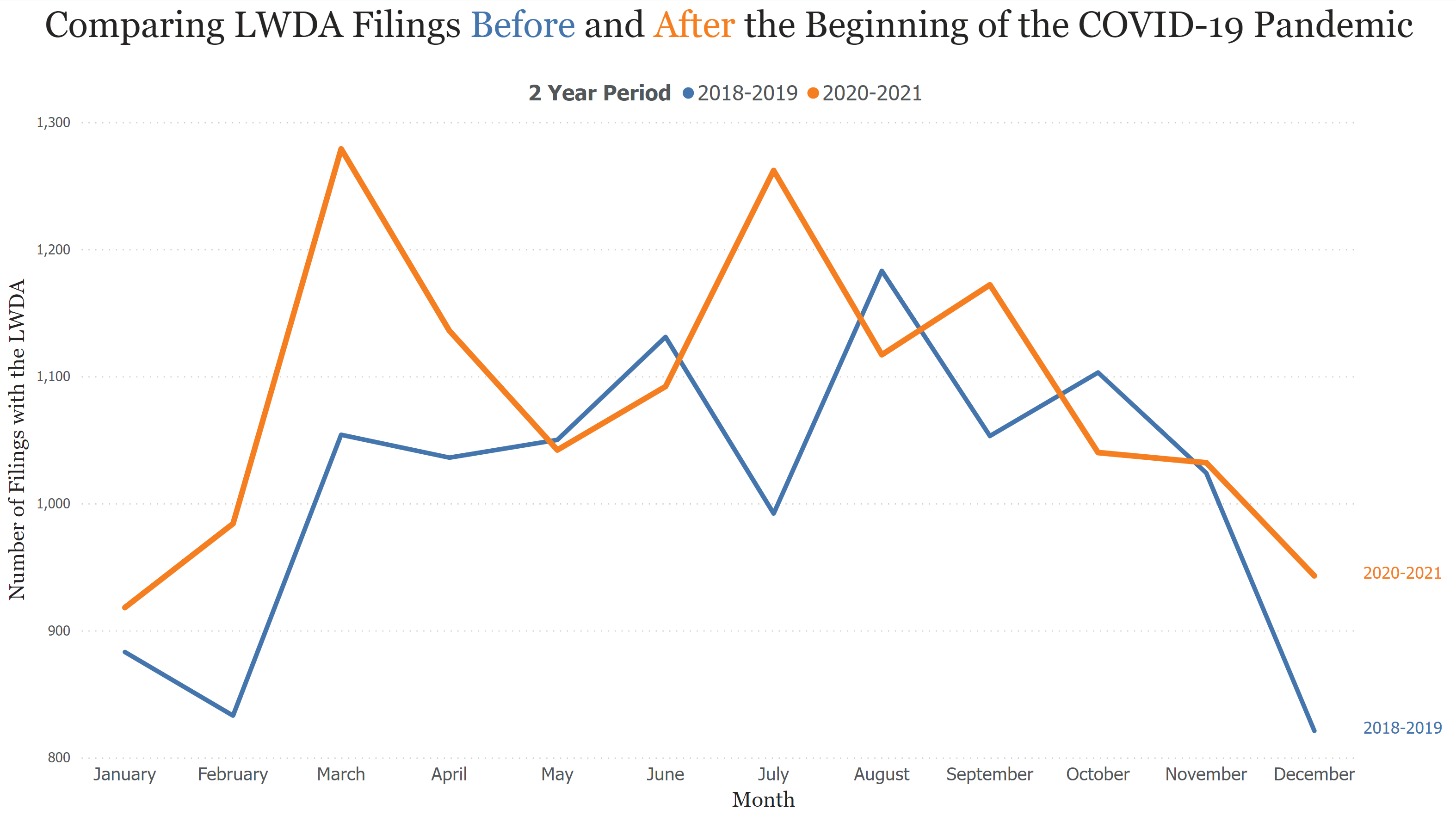 The highest filing increases were in the months of March of 2020 and 2021, which saw an almost 20 percent increase in filings between the two periods, and July of 2020, which saw a 22 percent increase. March 2021 has the distinction of having the most PAGA filings in a single month ever with 647, surpassing the prior record of 632 in March of 2020, according to the data. Before 2021, the single month record was 601, which were filed in August of 2019. 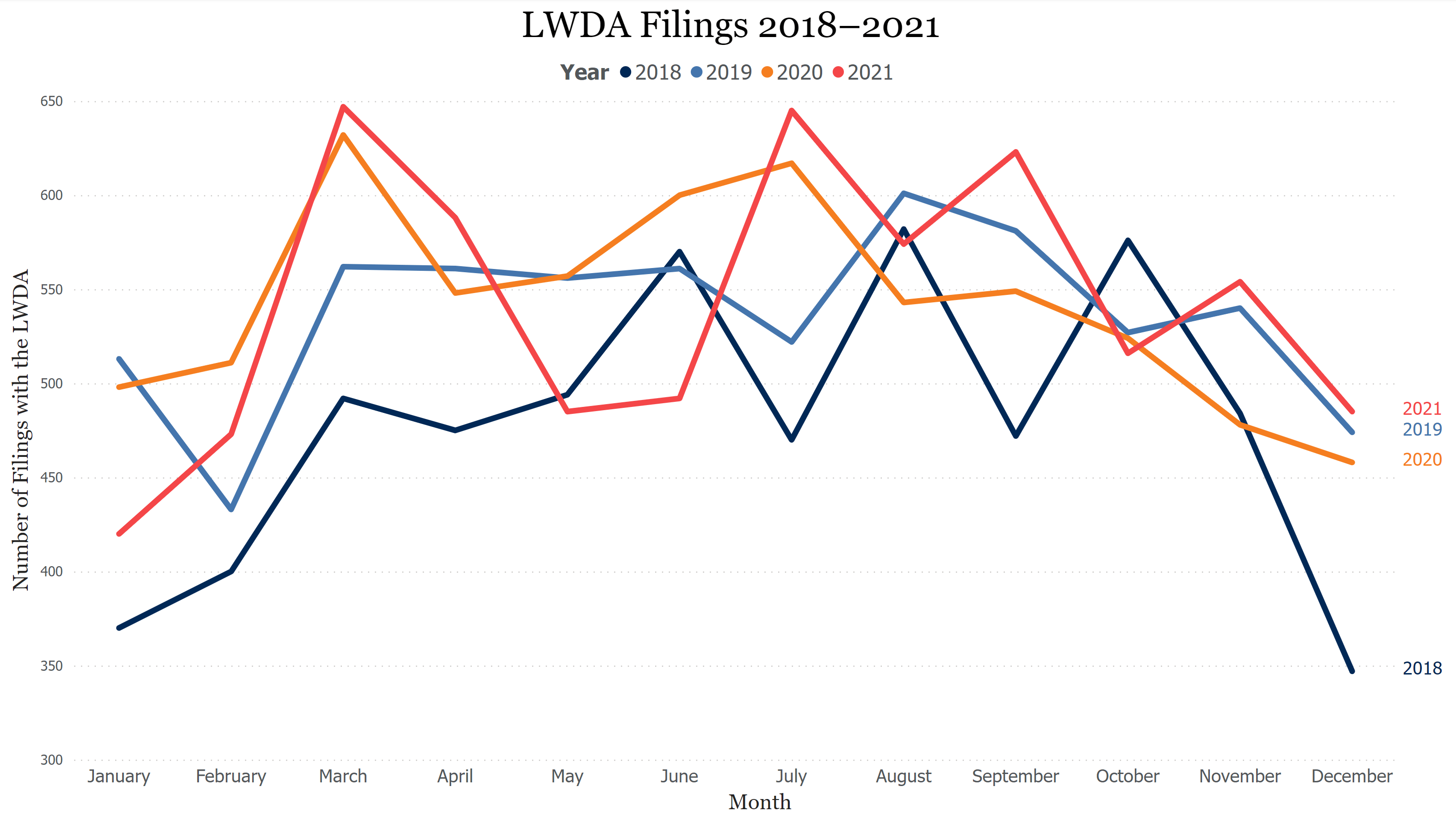 The overall upward trend was also reflected in the increase in filings made by the top filing plaintiffs’ firms in the state with one firm more than quadrupling the number of PAGA letters it filed in 2020-2021 compared to 2018-19. In addition, the top 10 filing firms increased their number of filings by an average of 68 percent in 2020-2021 compared to 2018-2019, according to the data. 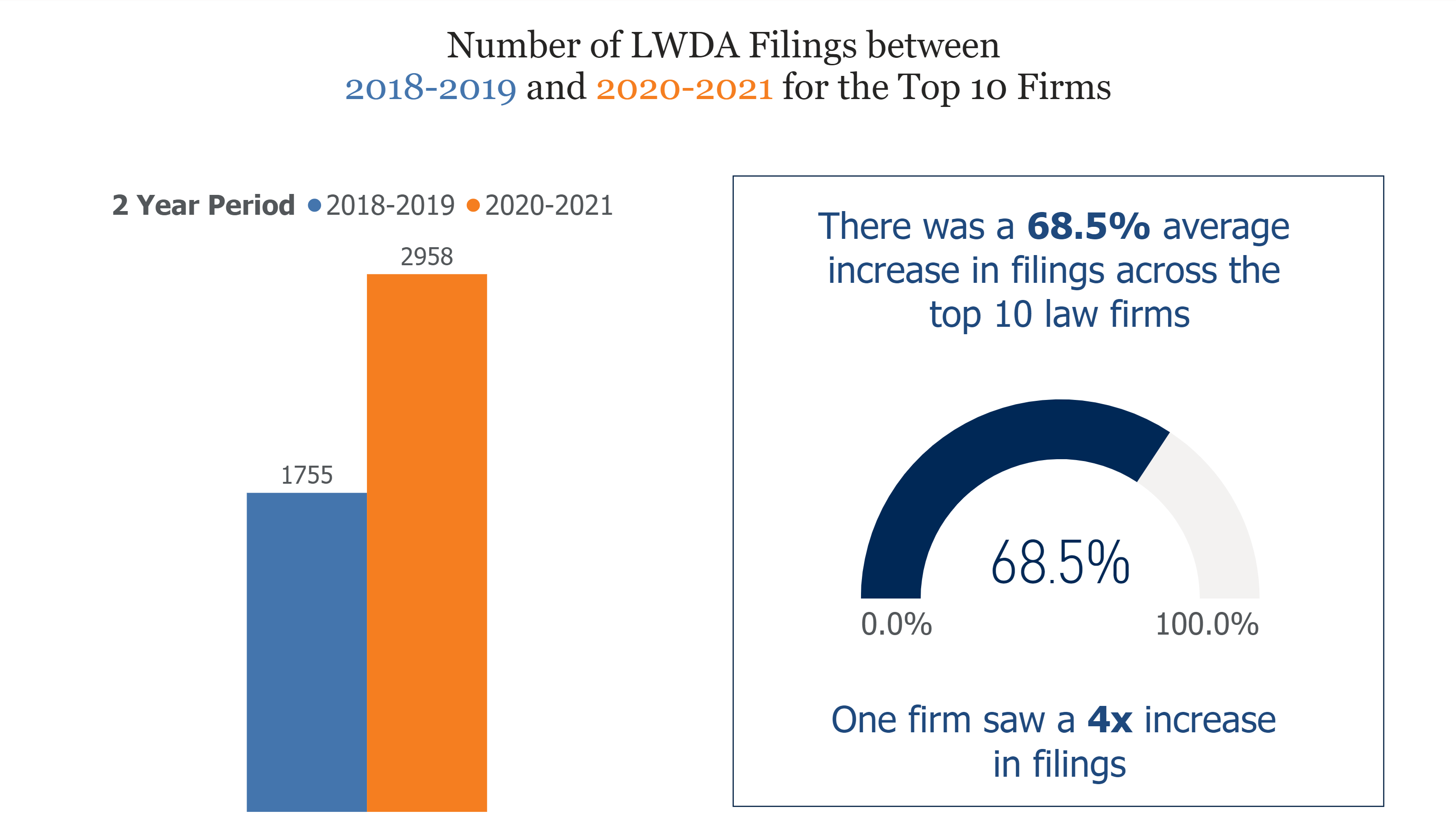 Despite the increases, filings against large employers (i.e., those with at least 1,000 employees) saw an overall decrease, suggesting that plaintiffs’ counsel are focusing more on small and mid-size companies with their PAGA filings. 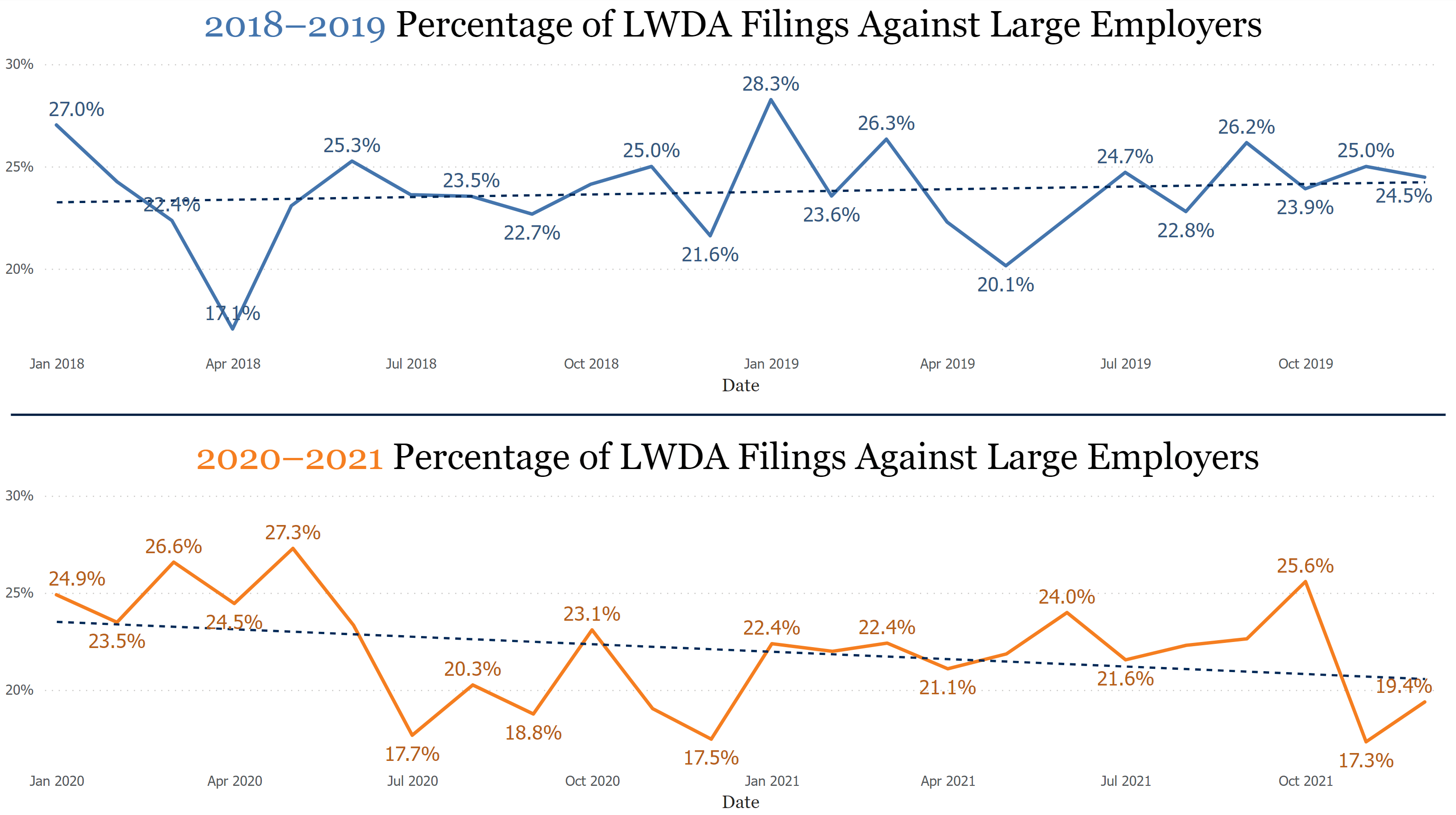 Large employers categorized as “General Medical and Surgical Hospitals” were the biggest exception as they faced a 56 percent increase in the number of PAGA filings between 2018 and 2019 and 2020 and 2021. 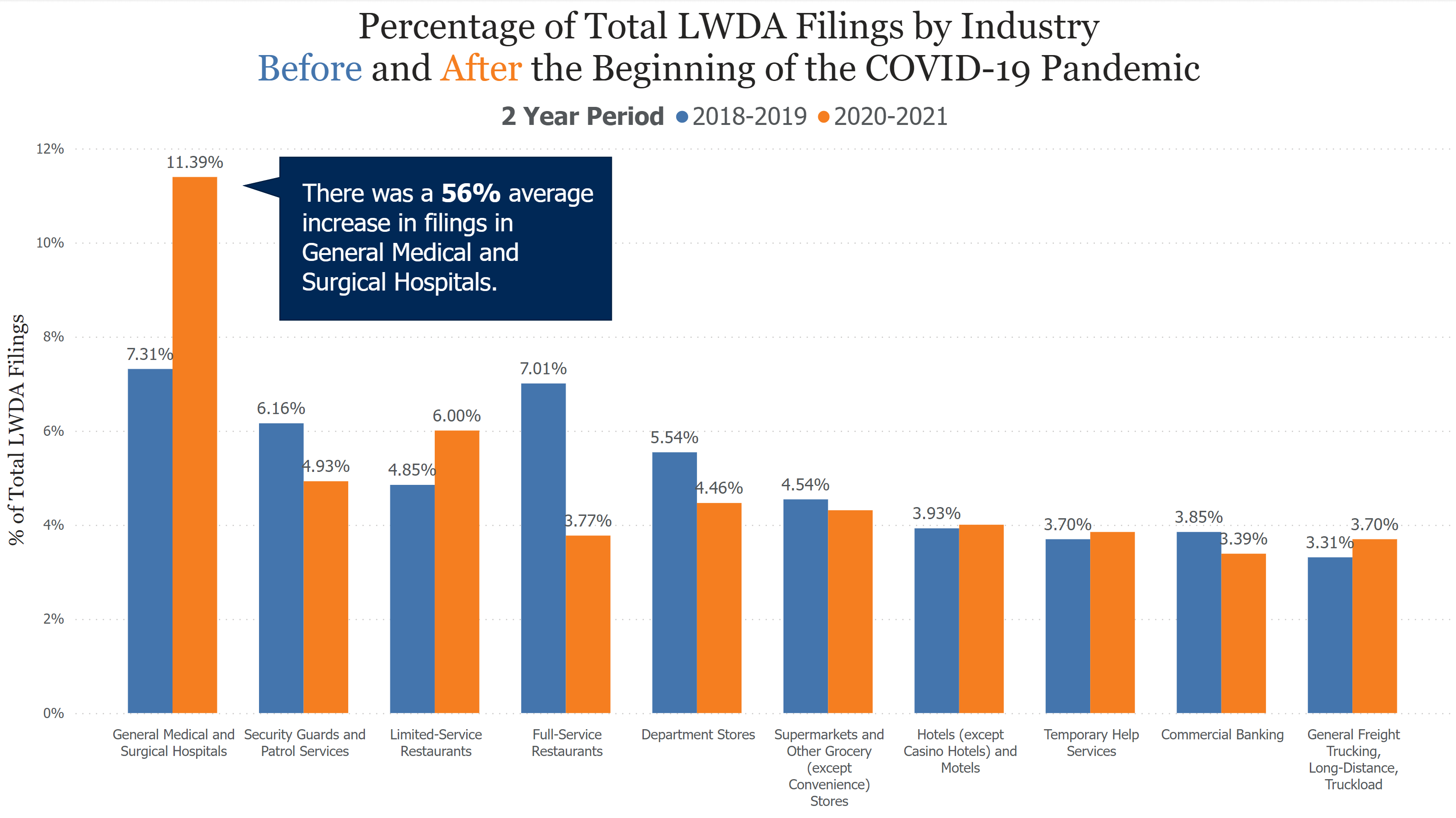 A plaintiff has one year after the last alleged labor code violation to file a letter with the LWDA. However, during the pandemic, plaintiffs’ lawyers argued that a special rule that tolled this one-year period applied to PAGA letters filed with the LWDA. During the early period of the pandemic, Emergency Rule 9 of the California Rules of Court applied to litigation deadlines, providing that “the statute of limitation and repose for civil causes of action that exceed 180 days are tolled from April 6, 2020, until October 1, 2020.” On that basis, plaintiffs argued that they had more time to file their PAGA letters with the LWDA.

But Emergency Rule 9 applies to civil proceedings, not administrative proceedings involving the LWDA. While access to the courts may have been hindered during the pandemic, the online filing process for PAGA letters was not—as the data has now confirmed. It is questionable whether Emergency Rule 9 applied to PAGA letter filings. The data shows that the pandemic never hindered that process since PAGA letter filings increased.

During the same period, California courts have not permitted similar PAGA action waivers, primarily because the courts have not recognized PAGA claims as being divisible between an individual PAGA claim that may be compelled to arbitration and a remaining representative action that may be dismissed. This has left PAGA as the remaining procedure for employees to bring collective actions for alleged wage and hour violations.

COVID-19 shutdowns and layoffs may also be a reason for more PAGA letter filings—especially when employee morale is low.

Could Change be on the Horizon?

On June 15, 2022, the Supreme Court of the United States issued a highly-anticipated decision in Viking River Cruises, Inc. v. Moriana that may impact the pace of PAGA letter filings. In the case, the Court recognized that PAGA claims are divisible between individual and representative claims, and that the individual claims may be compelled to arbitration under the terms of an arbitration agreement.  The Court also explained that if the individual claim is compelled to arbitration, then the PAGA plaintiff lacks standing to proceed with the representative (non-individual) PAGA claims, which should be dismissed.

Looking back, the uncertainty over the outcome of the Viking River decision may have contributed to the drop-off in PAGA filings against large employers (i.e., those with more at least 1,000 employees) since November 2021, the month before the high court decided to hear the case.

With the issuance of the Viking River decision, it will be interesting to see whether the upward trend in PAGA letter filings will continue or subside significantly. California employers may want consider implementing new arbitration agreements that include language to ensure that individual PAGA claims are compelled to arbitration, and non-individual claims are dismissed.

Ogletree Deakins will continue to monitor developments with respect to the Federal Arbitration Act and provide updates on our Arbitration and Alternative Dispute Resolution blog. Important information for employers also is available via the firm’s webinar and podcast programs.

In a case that received national attention, on February 26, 2014, a Florida District Court of Appeal held that a plaintiff’s comments to his daughter regarding a settlement with his former employer and his daughter’s subsequent comment on Facebook about the settlement constituted a breach of the plaintiff’s confidentially obligations……

Diversity: How Does the Legal Profession Measure Up?

Can the legal profession compete with other professions in the United States when it comes to diversity? According to the Current Population Survey (CPS), a survey of American households sponsored jointly by the U.S. Census Bureau and the U.S. Bureau of Labor Statistics, the legal profession’s diversity and inclusion initiative is…..